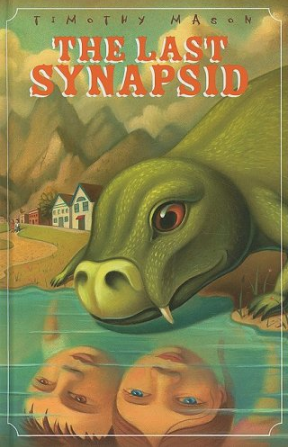 Faith, Colorado, doesn’t get many visitors. But this spring, a mysterious creature is lurking on the mountain…

The tiny mountain town of Faith, Colorado, is a quiet place – often too quiet for twelve-year-old Rob and his best friend, Phoebe.

But this spring, as the winter snows melt, the disappearance of a neighborhood pet signals the start of a life-and-death adventure that will change Rob’s and Phoebe’s lives–and possibly the history of life on earth–forever.

Long before the first dinosaur appeared, the world was populated by a class of creatures called synapsids.  Some were gentle, plant-eating beasts that looked like a turtle crossed with a wiener-dog.  Others were fierce, flesh-eating predators.

Now two of these creatures from the Permian era have wandered into a time snag and emerged in Faith.  Rob and Phoebe are astonished to encounter one of them on the mountain, speaking English and asking for their help.  The last synapsid–Sid, as the kids call him–is pursuing the violent, carnivorous gorgonopsid.

The Gorgon has become obsessed with humanity and refuses to return to his proper place in time.  But if he doesn’t, the synapsid line will die out, humans will never evolve, and Rob and Phoebe (and all of us mammals) will end up as nothing more than figures in an elderly synapsid’s dream.

Are you looking for a middle-grade novel with dinosaurs, time-travel, eco-responsibility, and Shakespeare for children?  If so, The Last Synapsid by Timothy Mason may be what you are looking for!

Timothy Mason has written a book that belongs on all middle school reading lists. THE LAST is a wonderful way to instill awareness of the issues we face and inspiration to be a part of the solutions: caring for Earth, each other, and our own true hearts. Thank you, Mr. Mason!!!!!

It’s just the right amount of scary: enough to be interesting, but not scary enough to have to keep my lights on at night. I like the imagery and the descriptions of the scenes. I have been to lots of mountains, and the descriptions of the mountains were very accurate, which made me feel like I was right there with the characters. I was always interested in paleontology and dinosaurs, so if you are, too, you will be interested in the story. I’m too old for a lot of stories about pre-historic creatures, but this one is good for my age.

The kids and the people in the little town are so perfectly imagined — it’s like the author transports you, which is kind of ironic since the whole thing is about time travel. The main creature characters of Sid and the Gorgon are much more than good versus bad. Their relationship and what they need from Rob and Phoebe is just complex enough to spark a rich discussion about human interactions. Parents will appreciate the intelligence of the adults in this world even as the author remains true to the viewpoints of his main characters. And any child who is interested in dinosaurs will be thrilled to find a whole new world that pre-dates them — the Permian era. I highly recommend this book as a fun, and in the end, moving adventure story about teamwork and learning to deal with the unexpected, and sometimes scary challenges life presents. A great read.