“THE FIERY FURNACE is…naturalistic drama from America’s heartland with a slice of poetry, a generous dollop of wit and a hefty serving of character subtext for actors to devour.” 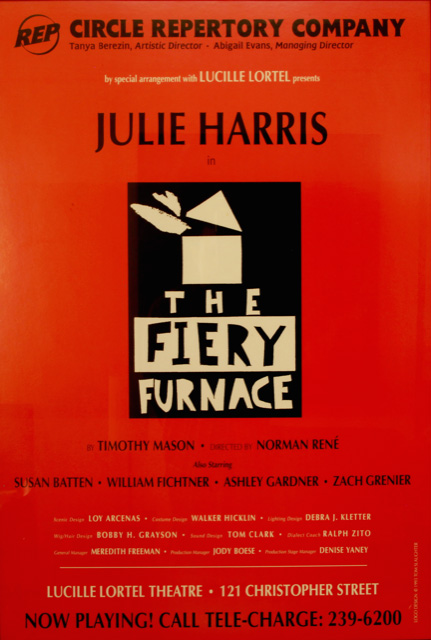 1950, rural Wisconsin. Faith is about to leave for the University of Chicago when her mother, Eunice, suitcase in hand, announces that she’s going too. Desperate to leave the confines of a stony marriage, she pleads for a last chance of escape.

Faith, also eager to break away from family and small-town life, recognizes her mother’s pain, and though hesitant, relents. But Faith’s sister, Charity, and brother-in-law, Jerry, have already informed the patriarchal Gunnar of his wife’s plan, and he threatens to cut off Faith’s tuition money.

The choice is painful, but Eunice puts down her suitcase, takes off her hat and Faith flees.

1953. Charity, the mother of twin boys, is nervously practicing a speech she will give in tribute to Eunice at a mother-daughter church banquet. Eunice is anxious to learn what Charity will say about her, while Jerry is full of his plan to get Gunnar to sell him a plot of land on which to build a drive-in movie theatre. When Jerry hears that Gunnar has sold the land to a rival with the same business intentions, his darker, violent side reveals itself.

1956, Thanksgiving. Faith returns home with her fiance, Louis. While his leftist politics cause tension in the dining room, the women come and go in the kitchen, waiting on their men. Eunice fears that Faith really does not truly love Louis, which Faith reluctantly admits. Charity reveals her suspicions of Jerry’s long-time infidelity, and Eunice talks to her daughters for the first time about the early days of her luckless, loveless marriage. Although separated by age, education outlook, the three women are for a moment united.

1963, New Year’s Eve. Gunnar, never seen but deeply felt throughout the play, lies dying upstairs. Jerry hovers over him, drinking heavily and making a show of concern, while all the time making plans to take over the family fortunes.